The word “trauma” appears everywhere we look these days. Some people  under-rate the cause of the trauma, like it’s no big deal. This may prevent the traumitized person from seeking the help they need. If trauma is ignored, the victim may not have the opportunity to heal, because others downplay their pain.

On the other hand, some over-rate trauma, which can also keep the traumatized person from receiving the help they need, because those close to him or her may try to keep sweep it under the rug.  As a counselor, I have seen both situations.

Another issue in trauma depends on the make-up of the survivor. Some people are highly resilient, like Navy Seals. I suspect they have to have the right temperament before they are selected for the job. Their lives depend on the whole team working together, knowing their job and doing it well.

Psychologists have learned much about trauma by studying the brain. Dr. David Amen and Dr. Timothy R. Jennings have made great strides in brain research and brain health.

I, on the other hand, have learned some things about trauma in my counseling office, especially in the area of ritual abuse. Years ago I went to an American Association of Christian Counselors conference. I attended a session where a woman had been diagnosed with dissociative identity disorder (DID) or also called multiple personality disorder. She had been healed of her alters (alternate personalities) in a short time.

I had never had a client with that diagnosis, but I found it fascinating. So I sought to learn more. I attended another conference, but wondered if I was wasting money. No. Almost as soon a I got home, I realized I already had two clients with DID and another one I co-counseled. It’s hard to diagnose if you don’t know the symptoms. Also I discovered someone in my family dated a person with DID. My psychology teacher in college said we would probably never see a client with this disorder, I have found it to be more prevalent than I thought.

People with DID have experienced horrific trauma in their childhood. It causes them to create alter identities in their minds. This helps them take a break from the pain and pretend to be another person. Many of the identities are children in their minds, because they created them as children. In a sense without knowing it, the host personality pretends to be  someone else, so they won’t have to feel the pain.

People seem to come in two camps when it comes to DID, especially when the client has memories of horrible abuse. They either don’t believe it or they are afraid to learn about it. They sometimes fear the person with DID. People with dissociative identity disorder struggle with life. They may believe they are a five year old child one minute and a sacred teenager the next.

People with DID are wounded souls seeking help, but they may not know where to find it. They are not dangerous. In fact, they are some of my favorite people. As they find someone they can trust, the healing begins. But it can take years for those who have had extensive abuse to integrate their alters.

They will be able to be themselves most of the time. However, depending on the extent of their dissociation, it could take a long time for the person to heal. I have worked extensively with three people with DID and helped with several others. They present as normal people, but once they trust their counselor, they allow their alternate personalities to emerge. Often they don’t know about the alters until they come out in counseling.

My book, What Lies in the Shadows: How Truth Healed a Splintered Mind, chronicles the healing journey of a woman I call Kathy. When she came to me for counseling, she already suspecting she had alters, but didn’t know she had about seventy personalities. As we began the counseling process, she remembered times when her mother taking her to a satanic cults to be ritually abused. She was a small child. Her child alters acted out the experiences on my office floor.

There are several other good books about people with DID, but this one is different. Kathy gave me all her amazing journals, where she and her alters drew pictures and wrote to each other and to Jesus. One by one, she wrote the stories of the child alters as if they were still there. Kathy gave me permission to use her journals to write exactly what she rememberd in my office. The words are those of Kathy and her alters just as she wrote them in her journals, so the words belong to her and the alter personalities.

Before writing this post, I checked to see where Irma is now. I heard this is the strongest hurricane in the Atlantic. It will soon be hitting several islands. This while just beginning the rebuilding after Harvey. 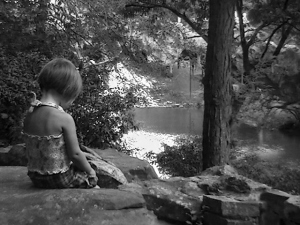 We already have thousands of people traumatized by the loss of their homes, their jobs, and in some cases family members. Not the least of these is children, children ripped from their homes and schools in little boats with strangers. Children waking up to a sea of water where their playground use to be. Hopefully they had time to bring their favorite toy, the one they sleep with. They don’t understand, and they are afraid. They may not show it, but their parents are traumatized too. Children know when their parents are scared.

What can be done?
Authorities say it may be months or longer before the families can get back in their homes, so people need emotional help.
I hope there will be counselors, but certainly not enough for everyone who needs it. Parents, you can help.

Take care of your own trauma
This involves finding a place to live and providing as much normalcy as possible.
Talk about your emotions.
Let yourself feel them.
Recognize the anger.
Then release it. (See the previous post on Anger, What Do I Do About It?)
If you don’t release it, it will make it harder on you and your family.
This is a natural disaster.
Maybe there were some things authorities could have done better, but that is hindsight. It can’t be changed.
Whatever you do, don’t take it out on your children.

How to Help Your Children
First reassure them you love them.
Reassure them they will be taken care of.
Allow them to regress for a time.
They may need to return to the coping mechanisms they used at a younger age.
That is normal for a while.
Try to limit exposure to TV to keep them from being re-traumatized.
If they are old enough to understand, tell them what happened at a level they can grasp.
Allow trauma-related play, but supervise to keep it from getting out of hand.
As much as time allows, play with them.
Let them guide the play. If it gets out of hand, you can stop it.

Whether you are a victim or a helper, take care of yourself or you won’t be able to help others.